Dales of the North York Moors

The North York Moors might be best known for its vast expances of heather moorland, but most visitors spent their time in the network of beautiful dales that cut into the higher ground. These vary in scale from the lengthy Esk Dale, which runs across the northern part of the Moors,

before reaching the sea at Whitby to tiny valleys. In the heart of the area are the parallel dales of Bilsdale, Bransdale, Farndale and Rosedale, each surrounded by steep sided slopes cut into the highest ground in the area.

The dales vary quite dramatically in nature. The standard image is provided by Rosedale, Esk Dale and their fellows, where the pastoral scene in the valley bottom merges into the wild heather moors as you climb out of the valley. Other dales are entirely hidden within forests, or dominated entirely by the heather, while in the south there are narrow, steep sided dales cutting their way through the Tabular Hills.

We start our guide to the dales with a series of maps - the first shows the main dales, the second is more inclusive, and shows every named dale we've traced so far, on six maps. 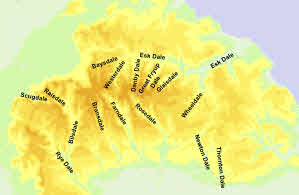 Map: Clickable Index to Dales of the North York Moors 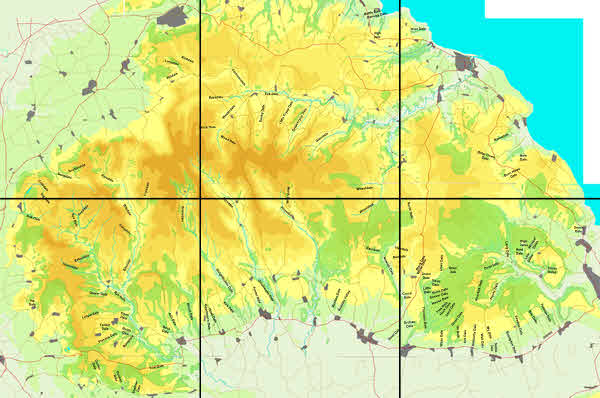